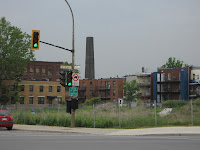 One of the (good) reasons Gérald Tremblay is going to lose the next municipal elections (the king is dead, long live the queen!) would have lost the last round of municipal elections, in a normal functioning democracy anyway, is the long list of dubious doings at the SHDM, Montreal's real-estate development agency. With Mayor Tremblay's incompetent ignorance, or his corrupt tacit approval, the SHDM:

The list goes on, but I wanted to speak here about SHDM activities in St-Henri (for the full story, look at the excellent series of articles in La Presse http://www.cyberpresse.ca/dossiers/shdm/ ). Suffice it to say that there seems to have been a complete anything-goes atmosphere at the SHDM. And it is clear that while low-income families in St-Henri and other neighbourhoods have trouble finding decent housing, the city has been handing out free money and land to wealthy real-estate developers.

Here in St-Henri the SHDM has had a hand in two recent projects. First, they associated themselves with David Owen, a real-estate developer with a impressive history of disregard for city regulations and controversial condo projects (particularly on the Plateau. A lot of the more ugly, slap-dash numbers are his). The Borough sold Mr. Owen a piece of prime real-estate (again) on the Canal, next to Gadbois. Supposedly this was a deal to compensate him for a piece of land in Pointe St-Charles, a kind of a trade. Before the land deal even went through, and of course before he had the appropriate permits, Owen had already started construction on the 150-odd units of condos (http://lapresseaffaires.cyberpresse.ca/economie/200901/06/01-679410-des-condos-construits-sanspermis-a-montreal.php). These condos were then marketed by the SHDM as part of their “property access” program.

The second project is the housing that will be constructed on the land of the old St-Elizabeth Church (on De Courcelle and St-Jacques, in front of the Home Depot, and where my neighbour Rejean got hit by a car when he was a kid running over to the rec-center that used to be there). When I first moved to St-Henri, the church was still being used by Korean Catholics. Then they moved on, it lay empty, and the city came up with a plan to develop 200 units of social housing on the lot. That was before the SHDM got involved, with the SOLIM. The SOLIM is the real-estate investment arm of the FTQ “solidarity investment fund”. Now, the SOLIM has also been under investigation, and its' director also forced to resign, when it was found that they were giving out construction contracts without appeals for submissions to companies associated with a member of the Hells Angels, Ronald Beaulieu (http://www.vigile.net/-FTQ-sous-la-loupe-?vue=736). The SOLIM bought the St-Elizabeth lot, and together with the SHDM, decided to modify the social housing project. They transformed it, predictably, into another “affordable” condo project, leaving 80 units of so-called affordable rental housing. (These “affordable” apartments are going to rent for 500$ the 3 ½. That is affordable for some people, but not for the low-income residents of the sector. Also, predictably, the rental units are the ones directly facing the highway, which, as we know, will be moved 30 metres closer. Whether we should be building housing next to highways when we know that highways cause significant health problems is another question. My feeling is that the problem is the highway, not the housing. If we know highways pose significant health risks for residents, well, we shouldn't be building them in cities, or at least attenuating their negative impacts with improved public transportation...).

The other thing that is happening with the SHDM is that they are being sued by an association of Condominium developers (http://www.cyberpresse.ca/actualites/regional/montreal/200905/26/01-859879-recours-devant-les-tribunaux-de-lapchq-contre-la-shdm.php ). I have to say that for once I am in agreement with the Condo developers (though not for the same reasons). They allege that the SHDM “affordable” condo program constitutes unfair competition, as the State in effect subsidizes the construction, permitting the SHDM to sell the condos below market rate, and thus undercut the private developers. Frankly, I don't have any tears to cry for the real-estate developers, but I agree that the State has no business allocating valuable resources to develop private housing (which does indeed meet a need, I mean of course middle-class people have the right to be decently housed as well) that doesn't respond to the priority needs of the neighbourhood.

Finally, a word about the accessibility of these "affordable" condos. They sell from between 180,00-230,000$. The generally accepted principle of affordability for a property is that its' price shouldn't represent more than three times your annual income. That means the one-bedroom condo that sells for 180,000 at the St-Elizabeth project will be affordable for households with an annual income of at least 60,000$ a year. The average household income for the area of St-Henri where the project will be built is 28,000$.
Posted by St-Henri Chronicles at 10 h 33 2 commentaires: